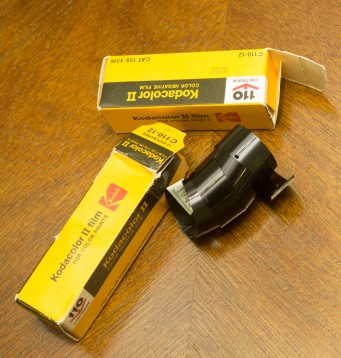 As the interwebs were fresh out of new 110 film and patience is not always my strong suit, I decided to try some expired cartridges I found on eBay. I had good luck with expired 35mm film in the past, only getting a few minor emulsion cracks here and there, so I figured “Why not?” Well, my luck it seems, was due to run out; the first roll I shot was on a trip to Helen, Ga. where I carried my little Kodak Tele-Instamatic 608 as a second camera. As these things go, I totally botched the development of both rolls of 35 mm I shot on that trip. “No worries,” I thought, “I still have some shots on my trusty 608!” So I sent off my film to Fuji labs and waited the long two weeks to get my prints. Instead of prints, I got a blank roll of film, an apology from the photo center and a lesson in the risks of expired film.

Did I learn? No, I’m cheap and still had rolls of this stuff to use so while waiting on the back ordered Lomography Color Tiger 110, I loaded my Minolta 470 with some Kodacolor from the Reagan years and took pictures of my grandson and daughter on a trip to Louisiana. Did I get lucky THIS time? Nope, just disappointment and another blank roll.

So what did I learn from these experiences? Simple, expired film may be fun to experiment with, but don’t count on it when the chips are down and don’t use it as your only film for important events. It’s not worth trying to buy expired film to try to save money as it’s just not reliable and usually not much cheaper. There is sometimes a shortage of new 110 film as Lomography is currently the only manufacturer (and I get nothing for promoting them, BTW) so support them please, and stock up when you can to avoid the disappointment I had.

On an unrelated note, I have several rolls of expired Kodacolor 110 film I am willing to part with cheap…..

Photographer, writer, traveler and seeker of adventure. View all posts by Shawn Ratcliff

3 thoughts on “Expired Film, is it worth it?”